The History of Hamamatsu Castle

Hamamatsu Castle, built by Ieyasu Tokugawa, served as a foothold for the unification of Japan and came to be known as Shusse (“Success”) Castle.
An introduction to the castle filled with the dreams and ambitions of the young Ieyasu.

Events leading to the construction of Hamamatsu Castle

In 1568, Ieyasu Tokugawa began moving east from Mikawa (now eastern Aichi) to seize territory held by the Imagawa clan. With Sunpu (now Shizuoka City) taken by Takeda forces, Ieyasu set his sights on the high plain of Mikatagahara that overlooks Totomi Province (now western Shizuoka) to prepare against an invasion by the powerful warlord Shingen Takeda. Deciding that Shingen must be defeated to open the way to conquer Japan, in 1570 Ieyasu left Okazaki Castle to his oldest son Nobuyasu and built Hamamatsu Castle on the southeastern edge of the Mikatagahara plateau as his base of operations in Suruga (now central Shizuoka) and Totomi.

Ieyasu Tokugawa built Hamamatsu Castle to be approximately 500 m from north to south and approximately 450 m from east to west. Built along the slope of the Mikatagahara plateau, the main keep bailey stood at the highest point in the northwest. To its east stood the main bailey, then the second bailey, and the third bailey to the southeast lined up in a roughly straight line in a teikaku style layout. The teikaku style features baileys that are adjacent to each other but in layers and is often seen in castles with natural defenses behind the main bailey.

Battles during Ieyasu’s time in the castle

Ieyasu Tokugawa spent 17 years at Hamamatsu Castle, from age 29 to 45. The famous battles at Anegawa, Nagashino, and Komaki and Nagakute took place during this period, as well as the Battle of Mikatagahara in 1572, said to have been fought even more fiercely than the Battle of Sekigahara. While the 17 years at Hamamatsu Castle included trying times for Ieyasu, they laid the foundation for 300 years of Tokugawa rule.

The Battle of Mikatagahara was a clash between the armies of Shingen Takeda and a Tokugawa/Oda alliance on the Mikatagahara plateau on the outskirts of Hamamatsu in 1572, and is said to be the worst defeat of Ieyasu’s life. Ieyasu faced 30,000 Takeda men with a small army of less than 10,000. As his forces were overrun, Ieyasu disguised himself as a retainer and barely managed to flee back to Hamamatsu Castle. Back at the castle, Ieyasu ordered a portrait be made of his disheartened expression right after the battle. It is said that he kept this portrait for the rest of his life to remind himself of the defeat.
The night of the battle, Ieyasu hit back with a surprise attack on the Takeda camp at Saigagake, on the southern edge of the Mikatagahara plateau. It is said that Tokugawa forces placed a white cloth on a cliff to make it look like a bridge in the darkness, sending Takeda men unfamiliar with the area plummeting off the cliff. An area named Nunohashi (“cloth bridge”) remains to this day. In modern-day Saigagake, a form of folk entertainment called Enshu Dainenbutsu (“Great Buddhist Prayers of Totomi”) is performed each year on July 15 in memory of those who died in the Battle of Mikatagahara. It has been selected as an intangible cultural asset of the city of Hamamatsu. 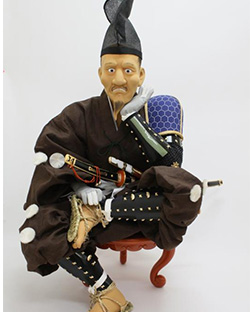 Tokugawa clan before the Battle of Sekigahara were appointed to protect the castle. Many of those who served as castle lord went on to important positions in the government, leading to Hamamatsu Castle’s other name, Shusse (“Success”) Castle. After the Meiji Restoration, the castle was destroyed and left in ruins. But in 1958, a new main keep was built on the Nozura-zumi main keep base and was named a Hamamatsu City historic site the next year. 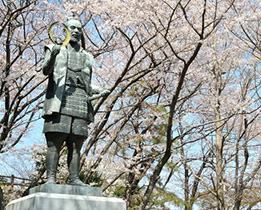 Origins of the Shusse Castle name

During 260 years of feudal rule, 25 men served as lord of Hamamatsu Castle. Many of them were appointed to important government positions while lord of the castle, such as five Roju (Shogunate Elder), two Osaka Jodai (administrator of Osaka Castle), two Kyoto Shoshidai (the Shogun’s deputy in Kyoto), and four Jisha Bugyo (Commissioner of Temples and Shrines). (*Includes concurrent posts) As a result, Hamamatsu Castle came to be known as Shusse Castle, a stepping stone to success. One of the notable examples is Tadakuni Mizuno, famous for his Tempo Reforms. It is said that he volunteered for the Hamamatsu Castle assignment to follow in the footsteps of Ieyasu, who unified Japan. 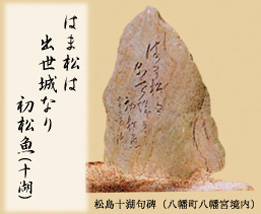